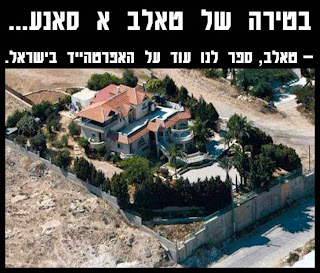 1.   It is not really news when someone discovers that the bulk of the Arab citizens of Israel  (not of the West Bank but inside Green Line Israel) are pro-terror anti-Israel jihadists.  What is news is that this time it is the Marxist sociologist Sami Samouha (or Samoha) who is saying so.  And if Samouha reports findings of 58% of Israeli Arabs endorsing anti-Jewish violence, I suspect the true number is much higher.  After all, Samouha has a long track record of prettifying the political positions of Israeli Arabs and has also participated in "One State Solution Conferences," which call for Israel's complete annihilation.  For more on Samouha, see http://www.isracampus.org.il/third%20level%20pages/Editorial%20-%20Lee%20Kaplan%20-%20Sammy%20Smooha.htm

Here are the details on the new poll:

Most Israeli Arabs oppose a Jewish majority, support a Palestinian uprising and want Iran to have nukes.

About 58% of the Arab citizens of Israel say that the Palestinian Authority Arabs would be justified in starting a violent rebellion ("intifada") if the diplomatic process does not advance. A similar percentage advocate an "intifada" by Israeli Arab citizens if their situation does not improve considerably, according to a poll, which was carried out by Prof. Sami Samoha of Haifa University, with the Israeli Democracy Institute.

The views are in line with the call Monday by an Arab Knesset Member, for an Arab intifada inside Israel.

The poll shows that 63% of Israel's Arab citizens think Iran should continue its nuclear development, despite the evidence that Iran seeks Israel's destruction through nuclear weapons.

About 54 percent of the Arabs prefer Israel over any other country as a place to love. And yet, 70% do not accept Israel's right to maintain a Jewish majority.

While 70% of the Arabs say that the government is treating them like second-class citizens, a full 72% would like the Arab parties in the Knesset to join the coalition – although the Arab MKs themselves oppose this move.

Prof. Samoha said that while the opinions in the Arab sector have become more extreme, "the red lines have not yet been crossed." However, he warned, "a continued deterioration of relations could cause disquiet and instability."

2.  For those of you still concerned about the sufferings of Israel's poor Arabs, what with apartheid and all, you can see the mansion in which the radical anti-Israel Knesset Member Taleb a-Saana lives, here:

The Ewings of "Dallas" were mere pissants in comparison.  Wouldn't you sure like to know where the money came from for it?

3.  We all know "Peace Now" as the hardcore anti-Israel far-Leftist organization that is soft on terrorism and hard on any Jews daring to move into "Arab neighborhoods" where "they do not belong."   But there is increasing evidence that Peace Now is an anti-Semitic organization.

Take for example the Op-Ed in Haaretz today (Hebrew only, at http://www.haaretz.co.il/opinions/.premium-1.2055977) by one Dror Etkas.  He is or at least was a senior Peace Now honcho (the head of Americans for Peace Now says he left Peace Now a while ago to run Yesh Din, Peace Now's little sister), and ran the tattletale "Settlement Monitor Staff" at Peace Now, set up by the radical anti-democratic Amiram Goldblum, the guy who initiated and ran that recent pseudo-poll claiming to show that most Israeli Jews favor apartheid.

Etkas has an Op Ed entitled "The Jews are hardly Repairers of the World" in the print edition of Haaretz, although the web edition softened the title a little and changed it to "Jews can also be racists."

(We know of course that at Haaretz and in the rest of the anencephalic anti-Israel Left, "racism" is a term that is used to describe any Jew who thinks Jews have the right to defend themselves and never is used to describe Arab genocidal fascism and terrorism.)

So Etkas is saying that the problem is not just Zionism, it is Judaism.  His mocking Jews for being insufficiently "world repairing" is a rather pathetic aping of the practice of the assimilationist Jewish liberals in the US to mis-define "Tikkun Olam" or "Repairing the World" as referring to the need for all Jews to be liberals/leftists.  In fact, Tikkun Olam means ridding the world of paganism, and Peace Now is one of the clearest examples of paganism that those seeking world repair should see is removed.

Anyway, his Op-Ed is an attack against fellow leftist Michael Sfard, a far leftist lawyer and activist in the semi-Marxist Association for Civil Rights in Israel.  Sfard's sin was to claim that Jews invented the code of universal ethics while this code is being demolished by Israel's awful "occupation."  Etkas is enraged by that claim of Sfard's because he insists that Jews never really advocated any universal ethics to begin with.   Etkas stops short of accusing the Jews of poisoning the wells and drinking blood on Passover.

For every quote one can come up with that shows that throughout the ages Jews were enlightened and sensitive, so opines Comrade Etkas, one can come with an opposing quote that shows the opposite.  For every Jewish liberal who fought for civil rights or against South African apartheid, he insists, one can also find at least one Jewish racist who collaborated with racism.   Note the "at least."   At best, Jews produced a tiny minority of people who were sufficiently ethical to satisfy the sublime standards of this Peace Now leader.

Take Algeria in the 1870, he says.  When the French imposed their own apartheid regime over Algeria, lots of local Jews there applied for French citizenship and "collaborated" with the colonialist regime.  That pretty much proves to Etkas that most Jews are moral cockroaches.   Then there were the Sephardic Jewish racists in Bordeaux in France who opposed liberation for the Ashkenazim Jews in France at the time of the French Revolution.  More cockroaches!  (Actually it is amusing hearing someone on the Left and in Haaretz complain about anti-Ashkenazi "racism" among Sephardim.)   While Jews were at times over-represented among the moral good guys in society (does he mean the Bolsheviks?), the Jews were also generally over-represented among the racist evil oppressors of society (illustrated by counting the number of Jewish czars who ruled in Russia?)!!  Thus any idea that Jews can serve as a beacon of morality to the nations is absurd, insists Herr Etkas.

In fact things are even worse than that.  The Book of Joshua in the Bible, says Etkas, proves how Jews are violent and genocidal and oppressors and lovers of occupation.  Yes he really says that!

The open anti-Semitism now emerging from Peace Now is extremely dangerous and important.  Since Israel has an anti-racism law on its books, one never applied to anyone except right-wing Jews, the time has come to proclaim Peace Now an illicit racist organization, and maybe also to ban it as a terrorist organization.

5.  You probably heard that the heroic French journalists Philippe Kersenty lost his appeal before a French court.  He was sued by French journalists for "libel" for correctly revealing that they had staged the hoax death of a Palestinian boy, Mohammed a-Dura, in Gaza.   See this report:  http://www.haaretz.com/news/world/french-media-analyst-convicted-of-defamation-fined-in-mohammed-al-dura-case.premium-1.532184

You realize what this means?  It means that the French court is almost as biased and as anti-speech as the Israeli courts!  You know, those Israeli courts who imposed a fine on a certain professor for reporting correctly that Neve Gordon, the anti-Israel pseudo-academic from Ben Gurion University who leads the Boycott Israel movement, had illegally entered Ramallah to serve as a human shield for wanted terrorists and to interfere with Israeli anti-terror operations.  The Israeli courts in question found nothing incorrect about what the Professor reported, they just ruled that describing the criminal behavior of Gordon as someone behaving like a Judenrat-wannabe was prohibited speech in Israel because everyone except leftists is prohibited from using "Holocaust era rhetoric" in political discourse.  I think you all know who the professor was.  The courts ruled that it was libel to tell the truth about Gordon in that way.

So as bad as things are in the French "justice" system, they have quite a ways to plummet before they reach the level of Israel's dual justice system.